You are here: Home » About Us » Meet the Team » The Weather Man 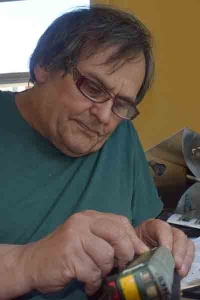 How often have you seen a layout at an exhibition which has been beautifully modelled to suit a particular era, and then populated with brand new stock straight out of the box? Yuk! Tony’s role is to ensure that this does NOT happen in McKinleyland.

Tony is The Weatherman, sometimes called Dirty Tony or Dirty Boy because of the amount of paint which ends up on his clothes, hands and workmates. In a nutshell he opens boxes of pristine, brand new railway stock and attempts to make it look old, dirty, stressed and/or add some kind of realistic patina. He’ll also add wagon loads if required and modify anachronistic stock to fit a particular time frame.

As any first-rate make up artist will tell you a little can go a long way, and powdering heavily is strictly for pantomime dames (all together now: “Oh no it isn’t”); Tony, whose background is in aircraft modelling, already knew that more can often be less. It’s getting the correct effect under layout lighting which presents the challenge.

Although he says, perhaps too often, that he had no prior knowledge of the art where trains were concerned, he took to the role like a duck to orange sauce. But help was at hand; the McKinley Railway has a vast library of books ad magazines at the team’s disposal (Ed: Please wash your hands first), as well as, as Tony says, “a richer and more valuable source of information, opinion and feedback; the other members of the team”.