You are here: Home » About Us » Meet the Team » The Historian 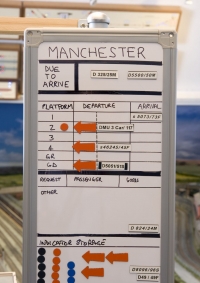 You will have heard of the Six Wives of King Henry VIII. And the Seven Wonders of the Ancient World. And maybe the Twelve Labours of Hercules.

But are you familiar with the 200 Locomotives and the 1,500 Items of Rolling Stock on the McKinley Railway? We thought not.

The very fact the actual numbers are even known is largely down to the unstinting dedication of Wimborne Model Railway Society member Iain Bell. His research skills and eye for historical detail are legend within the team, as are his love for tea and frozen chocolate biscuits.

After seeing McKinley on a club visit Iain began an initial survey of the stock inventory; priorities included information covering where everything was, what it was, when it ran in the real world and how well it worked. This was recorded in a database which later became the basis for all stock information for the new iPad-driven operations system.

All this hi-tech cool stuff will eventually control the temporal aspect of the railway with the stock's relevant periods of operation carefully controlled. Iain principally maintains and updates the database, but also carries out historical research on rolling stock for any team members who might be doing a project of their own.