You are here: Home » About Us » Meet the Team » Noisy Bryan 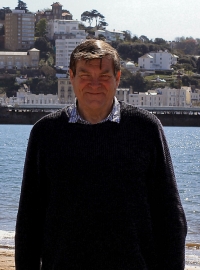 Bryan first got involved at McKinley in about 2007 after layout owner David Townend heard some of his locomotive sound files in action on a mutual friend’s railway.

These two intrepid audio explorers once enjoyed a memorable boys’ day out as guests on Network Rail’s New Measurement Train (a.k.a. The Flying Banana). Bryan was attempting to record the sound of the Valenta engine which was being rapidly replaced by the MTU engine on the regular running 125 stock. The duo clocked up 956 miles across the UK in 19 hours!

Bryan’s hobby/job for the last 12 years has been the recording, editing and digitising the sounds of British modern and heritage locomotives for use in model railway sound decoders.

One of the big challenges Bryan has been involved with at McKinley is to develop a method of adjusting the settings to better suit operation under computer control. The outcome has been to make all McKinley’s sound-equipped locos as close to prototypical as possible.

Bryan sees the McKinley team as “very much of a family with a common goal”, and still enjoys listening to trains with his own sounds fitted running through the scenic sections of the layout. As do we all.