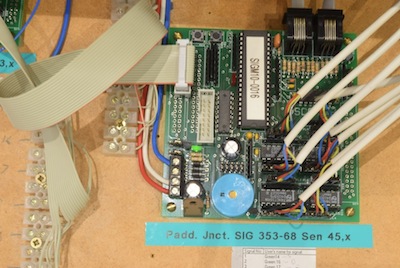 Using CML (now Sig-naTrak) SIGM10 electronic boards, the signalling on the layout is a cosmetic display designed to mimic real life. This gives the effect of having an active signalling system. The trains don't directly obey the signals, although they appear to do so; they actually obey the Train Controller software while the signals passively follow Train Controller's actions and decisions. 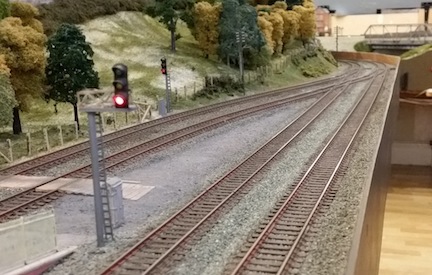 One of the SIGM10s for London

For example, if a point is switched and creates a conflicting route, the SIGM10 control board will 'hear' the turnout change command over LocoNet and, depending on the direction of change, will use its pre-programmed logic to ascertain which of the signals it controls to turn red and which to turn green in association with the point in question.

McKinley Junction is set against, so the signal shows red

This gives the illusion of a signalling system which controls the trains as they move around the layout. It’s another example of how the electronics which are at the heart of the McKinley Railway appear to replicate real life operation on an actual railway.