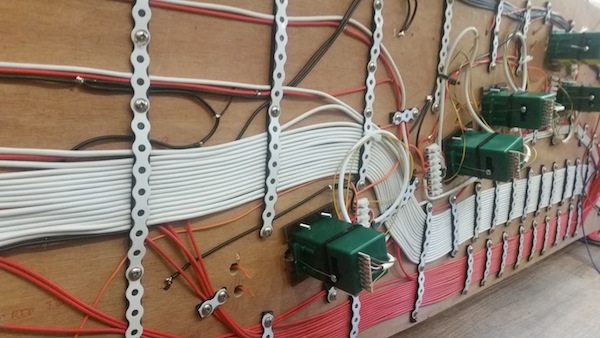 With a relatively simple layout, it is often proclaimed that only two wires are required to provide power for a DCC system. With a single loop of track this would work, but out in the real world of model railways this really isn’t recommended.

The McKinley Railway is anything but simple, and we have used hundreds, if not thousands, of wires under the layout to help control its myriad systems. A nuclear submarine would probably have more wires, but it would be a close call.

We don’t launch missiles (at the moment) but we do a lot of other cool stuff.

Underneath one of the new baseboards

Perhaps the most obvious example of where wiring is needed is for track power and DCC control of locomotives, which are carried simultaneously by the same wires. A pair of wires, as stated above, might handle the requirements of a circle of track around the Christmas tree, but multiple power districts mean multiple wires, and the number can go up pretty quickly on a big layout. 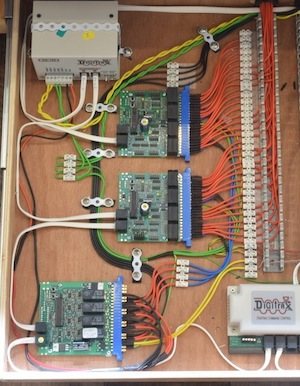 Each power district (fed by a booster) is sub-divided into at least four smaller sections via a power management board, and each length of track should have, in theory at least, its own supply, so you get the general idea. And that’s just for track power and loco DCC control.

Many individual electronics boards such as those which control points and signals, plus the point motors themselves, all require power wiring. That isn’t DCC wiring of course, but all these wires need to live somewhere, so it gets very crowded under the layout, and that’s before you start adding in the wiring which connects the points and signals, to their individual accessory boards, plus the wiring which goes to each block’s dual feedback sensors. And don’t forget that magic grey LocoNet cable; that has to live somewhere too.

The DAC20 boards that control up 8 points each

So while our layout requires a complexity of DCC and non-DCC wiring which is way in excess of what a smaller layout might need the principles are much the same. We just scaled things up a bit.