You are here: Home » Going Digital » Digital System » Loconet - The 'Ring Main' that links everything together

Loconet - The 'Ring Main' that links everything together

For the computer to communicate with electronic devices connected to the layout, manage the trains and give some form of feedback, everything has to be plugged into a special kind of ‘ring main’ that can transmit data. This is known as a “bus” and US manufacturer Digitrax has developed a bus called LocoNet. 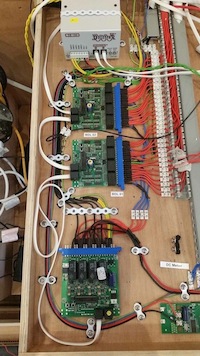 The Digitrax system was chosen for the McKinley Railway because Digitrax was, at the time, the only DCC manufacturer to have a full range of devices that linked into a system-wide bus connecting everything together. This allowed the computer software to share information between devices and issue commands, all via LocoNet

LocoNet is a very important feature of the McKinley setup because it is the 'spinal cord' over which all communications between all linked devices are sent. Without it the railway simply wouldn't function in the way it is required to do.

We often get asked about what a system data bus like Loconet actually does. Probably the closest analogy we have found is junk mail. Think about it like this. Imagine you live in an area where everybody sends junk mail to everybody else. One person mails “I’m having a party on Saturday”. Each person receiving this message then has a choice; either chuck it away or look at it. Everybody gets these messages and chooses if they can or should react. 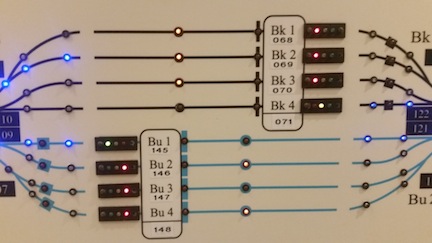 On the McKinley Railway a certain type of device (the Digitrax BDL168) sends out an occupancy message on this junk mail (LocoNet) bus, and all 150 other devices connected to LocoNet pick it up, or decide to ignore it. The key ones that pick it up are the overhead display boards (which show occupancy to the human operators via LEDs), the signalling system which says “Oh, that section is occupied, so I’ve got to turn this signal red”, and, of course, the computer software which looks at all messages from all devices constantly and makes multiple decisions accordingly.

So that’s how the LocoNet bus works in simple terms. LocoNet enables all kinds of devices, and humans, to do stuff. That one message can be sent across the same two wires to anything else which is connected. No devices need to be connected to each other; a single daisy-chained LocoNet cable does the job across the whole layout.