You are here: Home » Layout » Locations

London Kings Park is the first station visitors see when they enter the McKinley layout room. It is the biggest station on the layout and marks the southern terminus of the line. 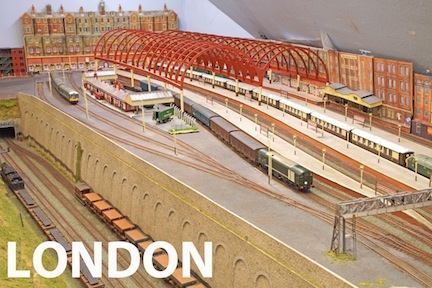 ‘London’, as it known among the McKinley crew, has six passenger platforms, and a single goods reception/departure track. Alongside the platforms at the front of the layout there is a busy parcels yard, with an extensive engine shed and turntable just beyond the station throat.


The latter sees extensive activity during operating sessions, especially when arriving trains have a steam locomotive removed for servicing and storage.


Passengers on departing services will see London’s carriage sidings to their right as their train crosses the station approach bridge and joins the mainline.

London Kings Park’s architecture is loosely based on Isambard Kingdom Brunel’s Paddington Station in west London, with its iconic arched iron roof which dominates the surrounding area. During operating sessions a Station Manager and an assistant are normally required to run the station.

Manchester Park Street is only a few feet from London Kings Park in the main McKinley layout room, but hundreds of miles away in our version of the real world. 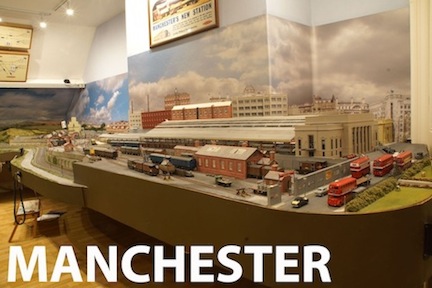 Manchester is at the northern end of the railway, and is a bustling terminus handling a variety of passenger and freight traffic from all points south. It may be grim up there, but it’s always busy.


The station has four passenger platforms and an additional two goods reception/departure tracks, plus two sets of freight sidings.


Access to the station’s extensive carriage sidings is via a track which runs alongside the double track mainline just beyond the station throat.

And, as with London Kings Park, full engine stabling, repair and servicing facilities are in evidence, along with a turntable which sees plenty of use on busy operating nights. Manchester provides more than enough activity to keep two operators busy at all times.

Birmingham Central is roughly in the middle of McKinleyland but, unlike its larger and noisier siblings at London and Manchester is a through, rather than a terminus, station. 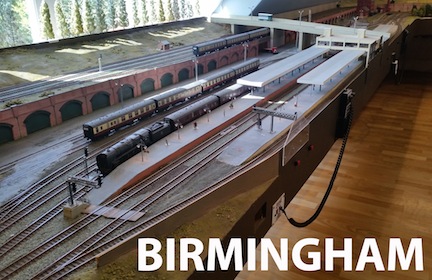 This presents a different set of operational challenges for the station operators, who have to deal with a large quantity of through traffic in the form of scenic trains which are never seen at either end of the line.

Birmingham has four through roads in the station itself, with two northbound and two southbound, each pair intersected by a platform which can handle full length stopping or terminating services.

Behind these lies an additional through road, with a goods reception/departure track, and two sets of sidings. The station also features an engine stabling point but, crucially, no turntable, so engines cannot be turned here and must instead be replaced, if required, by other motive power which is already facing in the correct direction.

Two experienced operators are needed to cope with the demands of keeping this busy station running smoothly during operating sessions.

Portarlington Interchange is the central location on the McKinley Railway for the classification of freight stock. In practice that means freight wagons of types, shapes and sizes are delivered here from all other parts of the layout, and are then sorted, or ‘classified’, into new trains for onward travel to their final destinations. 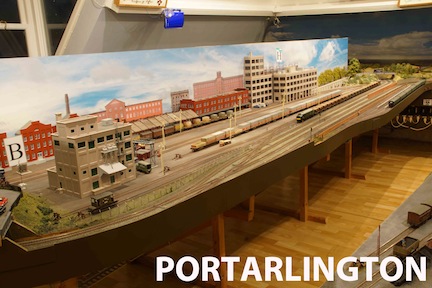 The facility is located on the layout’s long central peninsula which provides ample space for sidings to take the myriad of different wagons the McKinley roster possesses.

Portarlington has a dual-ended goods reception/departure track situated in front of its extensive sidings, so work carried out here is always ‘off the main’, which means no interruption of service on the adjacent north-south mainline tracks.

There are also limited engine stabling facilities which allow for fresh motive power to be attached to newly-made up trains, leaving them ready for departure in either direction.

It’s something of a misnomer that the station after which the McKinley empire is named is actually the quietest spot on the whole layout. 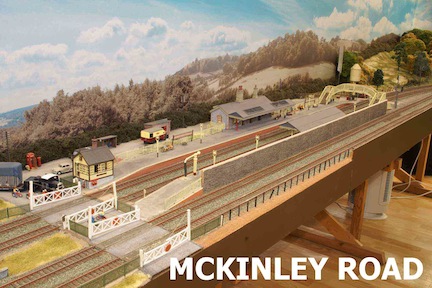 True, this charming rural backwater does lie on the very busy Red/Green mainline between London and the Midlands so trains thunder through its two short platforms at regular intervals.


But once their sounds die away peace and tranquillity return to this slice of middle England, a quiet punctuated only by the sounds of the local wildlife and the occasional passing motor vehicle.


This is the 1950s, and at McKinley Road rationing is still in force.

The biggest excitement every week is the arrival of the mail train from London Kings Park, an event always greeted by a crowd of boys wearing short trousers and drinking, one suspects, lashings of ginger beer.

The central Staging Yard is located outside the main layout room, and provides essential storage for trains travelling across all parts of the layout. This is the only place a visitor can see all four mainline tracks together, and is the principal storage, or holding area, for trains as they move around the layout. 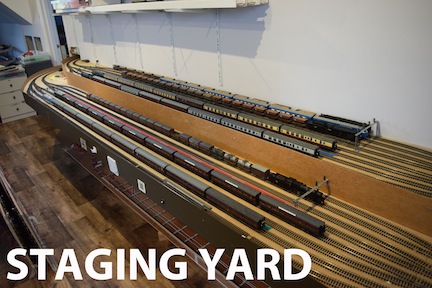 This provides a critical function in the railway’s timetable at which a train can be held to lengthen its journey between, for example, London Kings Park and Manchester Park Street; such a journey might in reality take only a few minutes even running at modest speeds but the break afforded by a spell at rest in the Staging Yard makes this a much more realistic proposition.

The Yard’s tracks are colour coded and split into four each for the Red, Green, Blue and Black mainlines. All trains using the Yard are fully automated, and the Yard has no human operator.

Each colour track is split into four, with each thus having three storage tracks and one through track for continuous running.

The through track on the Green Line is fitted with a track cleaning machine which ensures that all trains’ wheelsets are cleaned automatically as they pass this point.

The McKinley Staging Yard sits adjacent to the central control desk which gives excellent visual access for the Timetable Manager and Digital Driver, both of whom are based here.