You are here: Home » Workshop » Modifications » The Shunters

With the potential range of stock movements that can take place within station limits, Kadee couplers could restrict operations if they could only be uncoupled at fixed locations. It was therefore decided to develop a modification to all the station shunting locomotives to make it possible for them to uncouple anywhere on the layout and not be restricted to fixed uncoupling magnet locations. 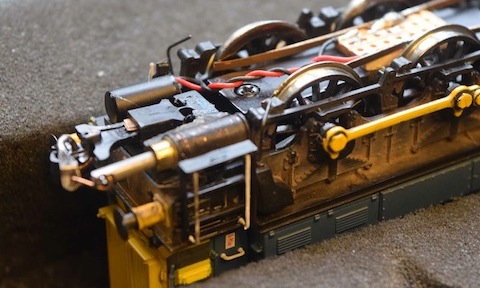 An 'N' scale Fleischmann point motor magnetic coil was found to be the perfect size to sit just behind a shunter’s buffer beam. The trip pin of the Kadee coupler is modified by bending it up to level with the buffer beam and then bent out so it sits at a right angle to the orientation of the coupler itself. Finally the magnetic coil and the trip pin are connected together.

At first this method worked very well. But the level of manual input required to operate this new uncoupling function meant the magnetic coils were frequently left active. Bad news; this resulted in coils overheating and often melting the engine chassis! It was also found that the high currents involved would strain locomotive decoders and cause them to fail.

The solution was to devise a circuit which would regulate the current to the coil reducing overheating, and be independent of power supplied from the decoder. It’s tolerant of short circuits as well. In addition, utilising functions not widely understood on some ESU decoders, the complete operation of reversing the loco to release the tension on the coupling, operate the magnetic coil, and move the uncoupled engine forward again was thus achievable with just a single function button press.