You are here: Home » Workshop » Modifications » The Brake Vans 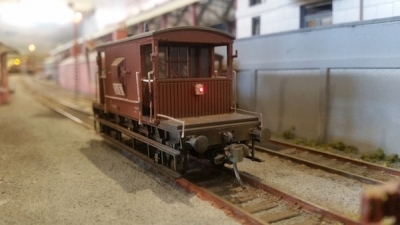 During an operating session, a brake van will depart one location on a train, arrive at a destination and then be sent off on another train in another direction. This means the brake van would have to be rotated so the tail lamp was always on the rearmost end of the train.

To get round this problem, a method was designed where the tail lamp on one end of a brake could be switched off and simultaneously the lamp at the opposite end switched on. A crucial aspect of this modification is that the last operating state had to be retained even if the power was removed from the vehicle.

A circuit was devised involving a latching relay and reed switch whereby the direction could be switched either with a magnet on the end of a stick, or automatically as a train passes the magnet at a fixed location.